Now, Socks is pissed and hiding in a corner. No more "yukky" meds for him today, I suppose.
Posted by rand at 6:24 AM 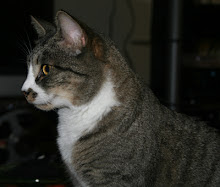